After seeing/reading all of the feedback, battle reports, photos and general comments of some recent events held in the UK (most you know what I'm on about and yes I'm jealous!).

I felt that it would be interesting to do try and do something similar among my regular gaming buddies.
My group of gaming buddies has recently expanded from 2 -3 others to nearly 6 -7 others.
Most of them are just starting to play.
One of them has only been playing/collecting for just over a month and now has already or currently on the way in the mail, around 4 - 5000 pts of Dark Eldar and close to 8000 pts of Chaos Marines.

So I'm currently going over the Tempus Fugitives Campaign info from their website.
I'm trying to adapt it slightly to help it fit our armies, which isn't all that hard.
Personally I'm hoping that they all like the idea and go for it.
I've already convinced one of them, and he thinks he can sell the idea to another one.
Now I just have to try & convince the other 5. :)

I'm hoping they say yes, as I can't wait to try out some of the elite units and Characters from the rule set.


I'll keep everyone posted on the progress of it all

As most of you are no doubt aware The Great Crusade Website is holding its second Short Fiction contest, which will be judged by Nick Kyme.

Here's a link to the competition thread. Link

After much umm-ing and ah-ing.
I've decided to post my entry here, the dialogue needs work, but I think the rest is not too bad.
Anyway have a read and let me know your thoughts.

He woke. How he had come to be in such a state he was unsure.

Reality strove to bring him back into its fold, the sound of firing artillery pieces nearby reached through his dulled senses.  Cautiously he tested the movement in his fingers and toes, emboldened by this small success he strived for something a little more adventurous. He hardened his resolve and forced himself to sit up, nausea threatened to swamp him, but he fought it off.

He looked around him to see that he was currently sitting on the bank of what appeared to be a crater, formed by an exploding artillery shell. He glanced down at his body to confirm what his nerves were telling him, he was remarkably in one piece. He started a visual inspection of his armour.  Its dull metal finish was covered in mud spatter and what appeared to be diluted blood. None of which was his own.

He grinned inside his helmet. ‘Still fit to fight on’ he thought.

His ear piece crackled into life. ‘Are you alright, Stuvant?’

He looked up at the rim of the crater to discover the power armoured form of Brother-Sergeant Argento looking down at him.

‘I’ll be fine, what happened?’ he replied.

‘Our position was targeted by counter-battery fire, of course they couldn’t miss your large ego and your foxhole was hit.’

‘I take it that the enemy guns have been taken care of?’

‘Nearly instantly, it appears they finally are tiring of this siege and are getting desperate.’

‘Good it means we’ve nearly broken them. The assault should begin soon then.’ Stuvant surmised.

‘That’s why I came looking for you, we’re assembling now, to ready for the assault.’

‘It seems Lord Perturabo is keen to move on to another system for some reason.’ Argento replied.

‘The Lord Primarch is here?’

‘No, he’s due in system shortly. He’s returning from a meeting with the Warmaster.’

‘Oh, seems like something is in the works then.’

‘Whatever it is, it is none of our concern. Have you gathered your wits yet? We should be getting to the muster’

‘No, looks like you’ll have to source another, on the way.’

‘Alright then, I’ll be with you shortly.’

With that Stuvant pushed himself to knees and then rose to his feet.  He carefully picked his way to the lip of the crater to join Argento.  Together they made their way to the form up point for a briefing on the following assault.

Shortly after, Stuvant stood next to Argento and the rest of their squad. They were waiting for the correct moment to commence the assault. Timing was crucial, right on time the Iron Warriors’ artillery pieces recommenced their firing. As the time to step off neared, the artillery barrage intensified. It was time, Stuvant nodded to Argento and they rose from their trench and advanced into what any normal human would have called hell.

Gouts of damp earth leapt into the air as High-Explosive ammunition with delayed fuses detonated beneath the surface. The enemy, sensing something was afoot, alternated between cowering in their defensive positions and firing sporadically at the advancing Space Marines. Their laser fire streaked across the visual madness, seeking targets. Their efforts proved futile, the armoured marines advanced fearlessly, firing their bolters at opportune targets as they continued towards their objectives.

Stuvant calmly fired from the hip as he advanced, trusting in his armour to keep him from harm.  The footing had become treacherous as the dark brooding clouds above opened up, drenching the already wet ground. Puddles formed in shell holes only to be blasted clear by subsequent blasts. Sinking up to their armoured shins in the mire, the Iron Warriors resolutely continued to advance. This is what they did, grind an opponent down and then once they had them where they wanted them, finish them off with a bold, artillery supported assault. Stuvant changed the clip in his bolter and realised that the enemy resistance was faltering. The headquarters should be just ahead, the enemy however seemed to have had all of the fight drain out of them, sapped by the constant pressure applied by the Iron Warrior tactics.

As per the Artillery Fire Plan, the Artillery shifted targets to cut off any retreat as they neared the objective. The ragged remaining defenders surged from their hidden positions in an attempt to deny the Imperial forces access to their HQ. They might as well of not even bothered. Malnourished, sodden and with no sense of organisation, they were calmly dealt with by Stuvant and his squad brothers’ controlled bolter fire.  Stuvant and Argento had the honour of taking the Command Bunker, Stuvant calmly placed the melta charge on the reinforced bunker door and nodded at Argento. Argento responded with a nod and Stuvant detonated the charge.  The door vanished in a white hot haze, leaving a small puddle of molten metal on the floor.

Argento and Stuvant were through the opening swiftly, smoothly gunning down the armed enemy soldiers inside. All was quiet, Stuvant and Argento scanned the interior of the bunker, all that was standing in the room other than themselves, was a man who appeared to be the enemy general.

The man looked up at them calmly.

‘You will order the remainder of your forces to surrender and become a compliant member of the Imperium.’ Argento replied.

‘I will not give that order, Sir.’

‘I strongly urge you to reconsider you position.’ Stuvant advised.

‘I will not give that order.’ He stated firmly.

A bolter shot rang out and his head imploded.

‘So be it.’ Argento said ruefully.

With their command structure removed, the remaining enemy forces were swiftly defeated. An Imperial Army Commander was placed in charge of Governing the system.

Stuvant and Argento sat calmly in their quarters aboard the Strike Cruiser ‘Resolute’.

‘Where to next, I wonder?’ Stuvant mused.

‘On to Istvaan.’  Argento replied with a smile.


Well its about time I posted some photos of my Models, so here you go. 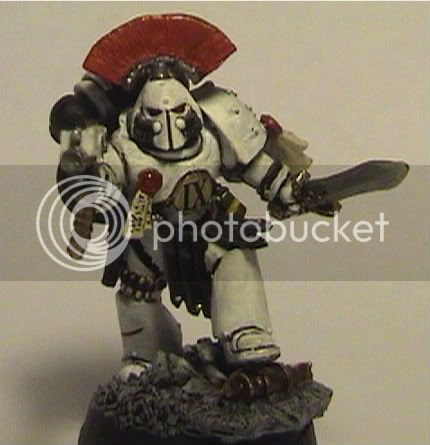 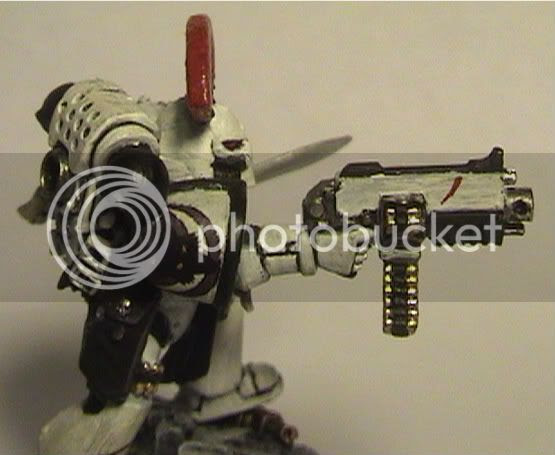 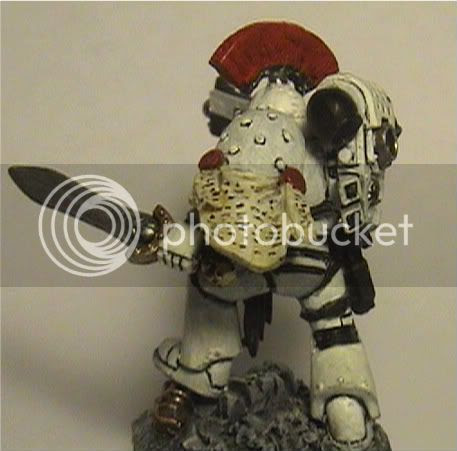 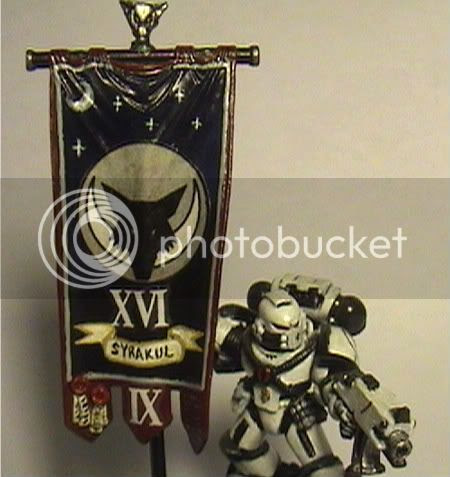 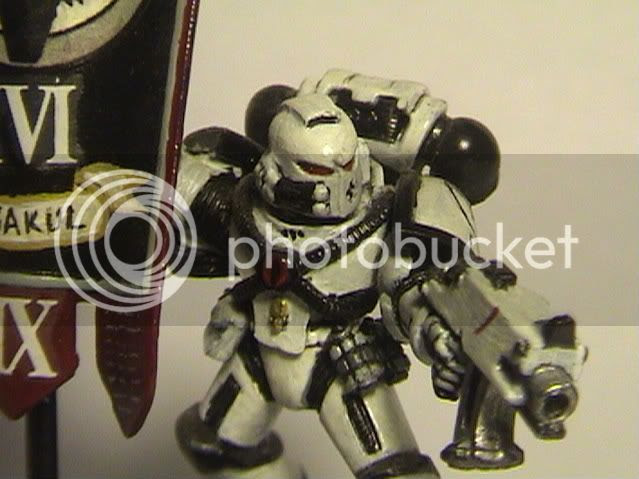 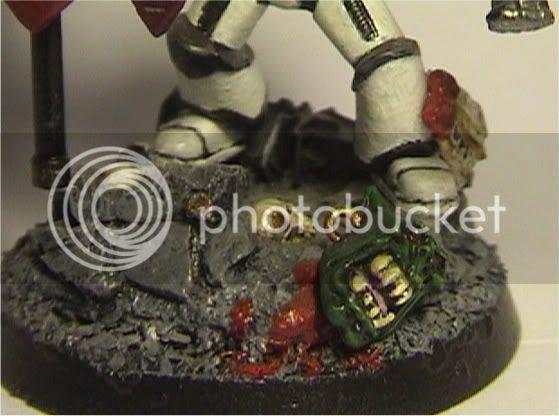 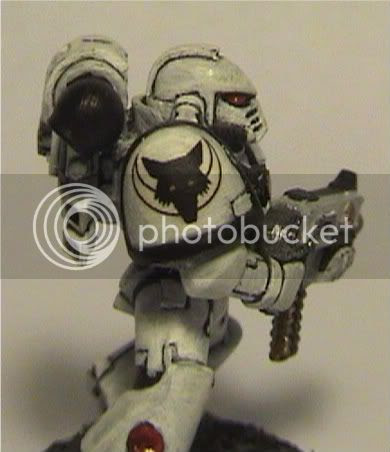 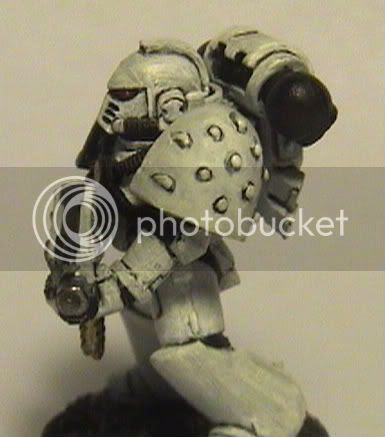 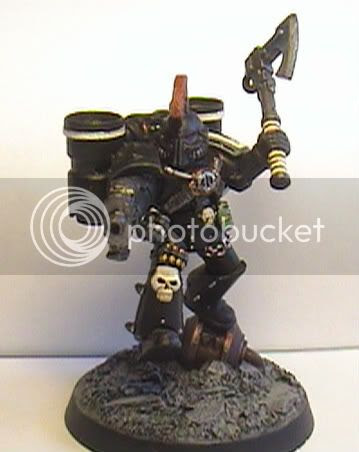 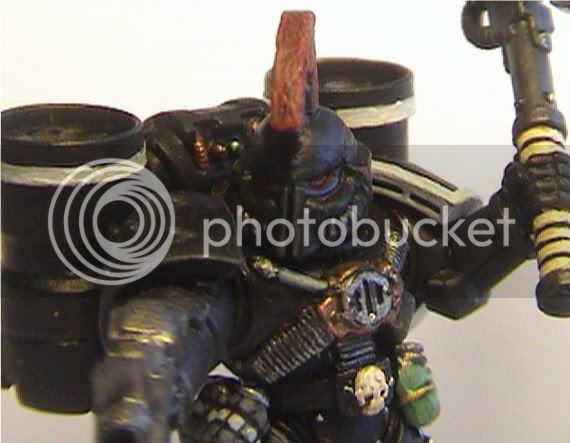 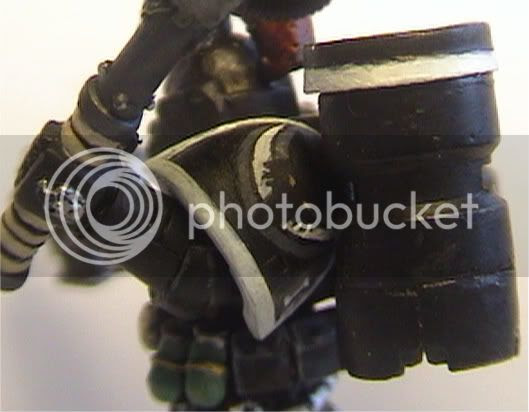 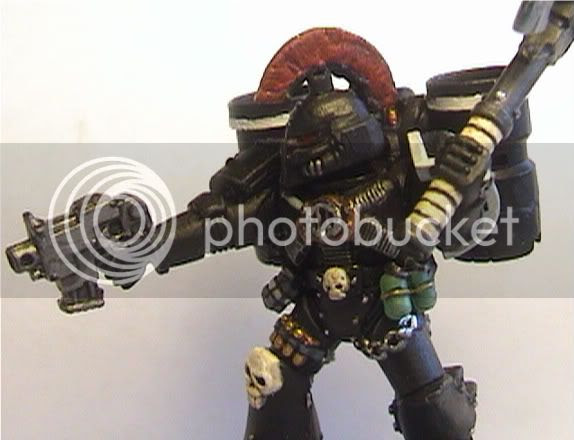 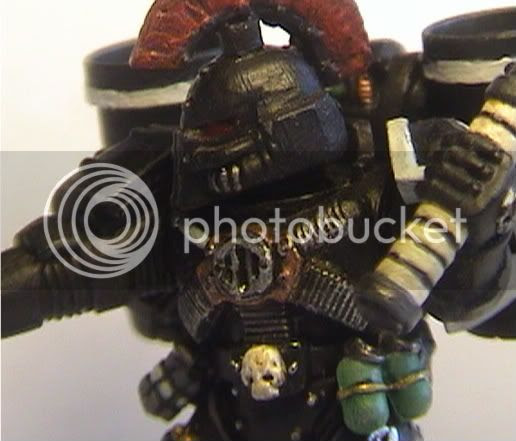 Some Work in Progress Pics (From Basecoat upwards) 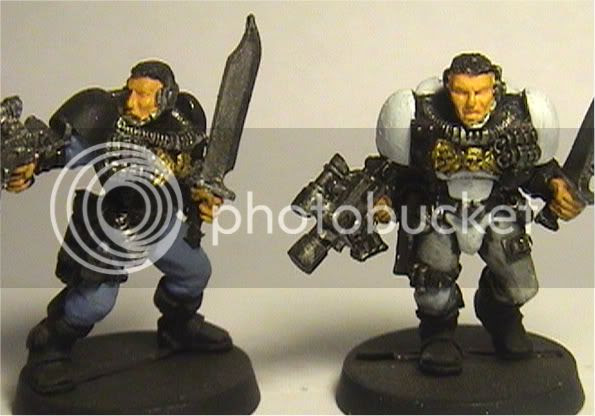 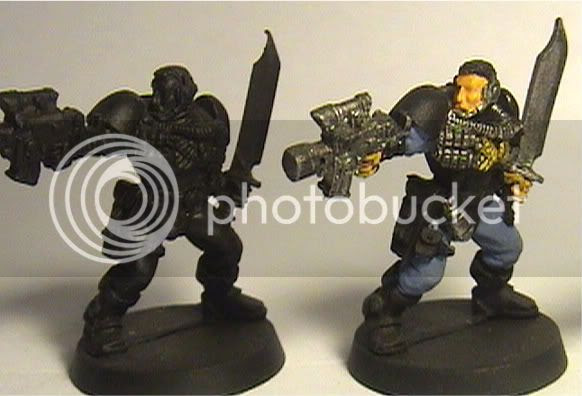 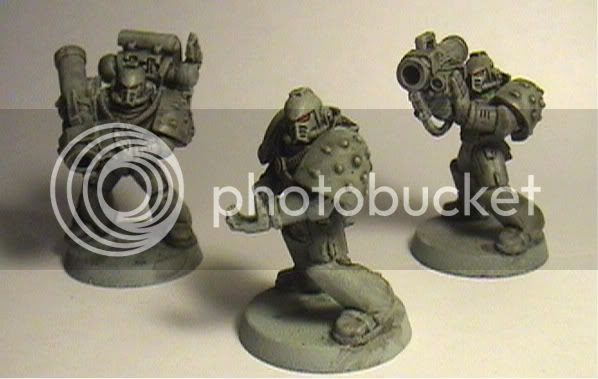 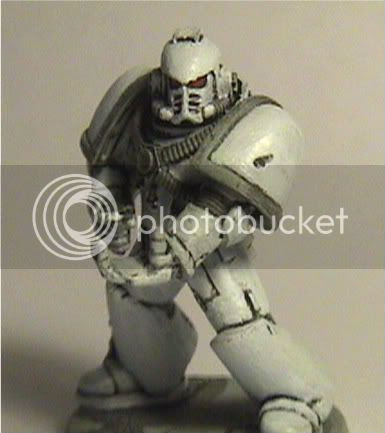 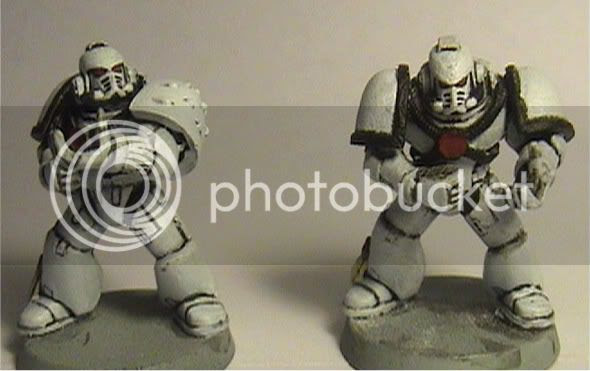 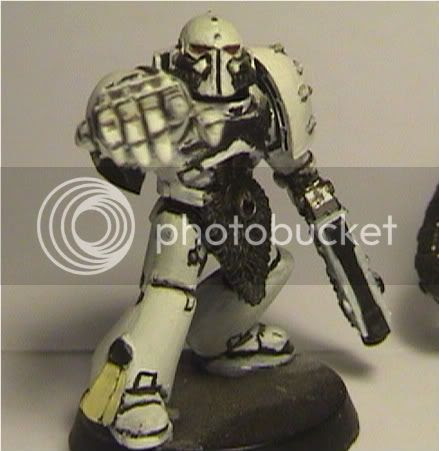 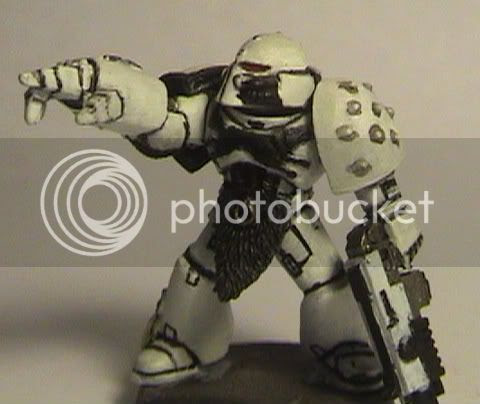 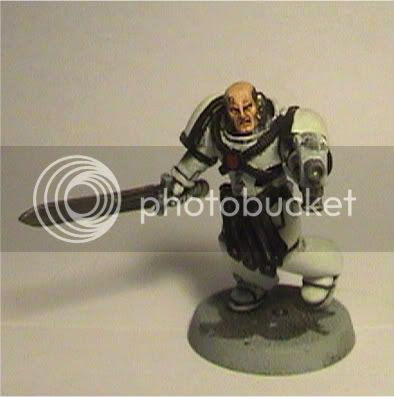 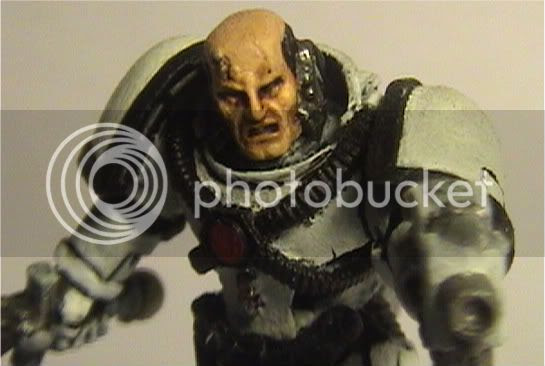 And something from another Legion

The first glimpses, ever, of WIP Ancient Rylanor of the Emperor's Children. 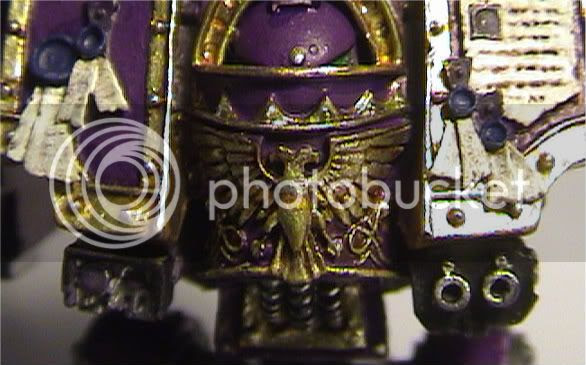 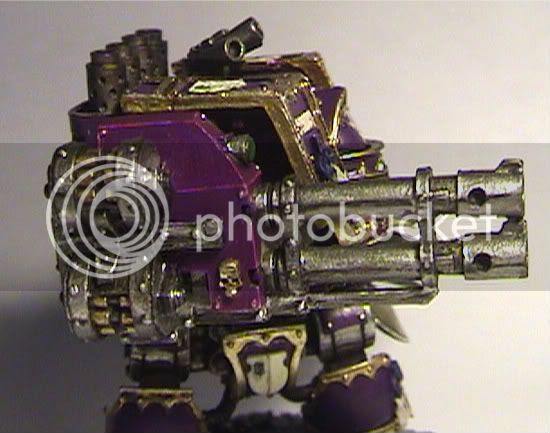 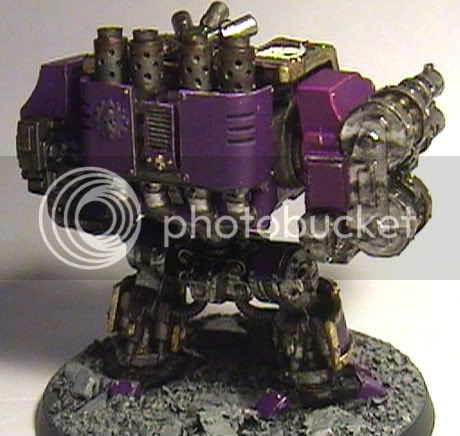 and the Final Shade on the Autocannon Arm. 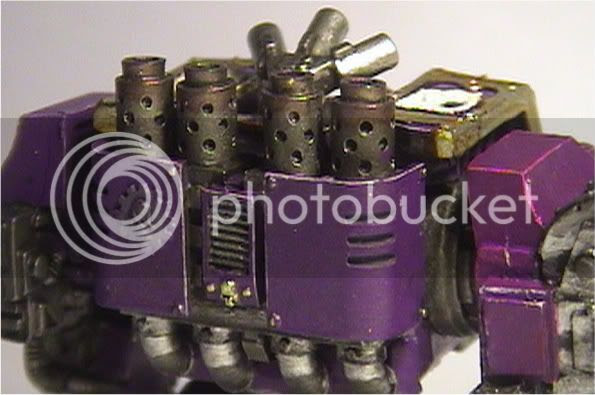 Which Codex to Use?

This is a question that repeatedly beats around in my head once every couple of months.

Not in the sense of how to make my force more dangerous on the table top, but more in how to make them as fluffy as possible.

I started this army during the later stages of 4th Edition.

With the release of Codex: Dark Angels & the Blood Angels PDF and also the musings of one Jervis Johnson on his ideas on how Codex’s were going to be written in the future.

Made me think to pre-empt future updates and write my own codex for the Luna Wolves, based on the DA codex with bits and pieces from the 4th ed. Marine Codex mixed in for fluff based reasoning.

The result of this can be found here: http://www.freewebs.com/yvraith/

However once Games Workshop released Codex: Chaos Space Marines, I shifted to using that instead, along the lines that it allowed me to use a more diverse range of the Pre-heresy legions in one force, also for some of the inherent weapon & vehicle restrictions e.g. No assault cannons etc.

Giving the marine squads, “Icon of Chaos Glory” for Luna Wolves &“Icon of Slaanesh” to Emperor’s Children, to represent their high standards of training etc, seemed to fit nicely too.

The diversity that was available for Terminators was fantastic and fitted my thoughts on how they would be equipped. (Initiative 5 Terminators with Lighting Claws is still very scary to an opponent!)

Upgrading the whole unit to Champions when fielded as the Justaerin was a nice touch as well.

One of the only things I didn’t like was the randomness of Chaos Dreadnoughts and found that I didn’t use them all that often because of it.

Also the inability to take scouts and Land Speeders I felt, was a drawback as well.

Then 5th edition dawned on us, the changes in wound allocation really hurt the Icon bearing squads and my interest in Codex: CSM waned with the release of Codex: Space Marines, which was met with much curiosity (from me).

Although some of the newer additions, were definitely not suited to a Pre-Heresy force. The return of some old Wargear (Conversion beamers anyone), some of them could be easily explained within a force based around this time. Sternguard and Vanguard Veterans for example are easy to explain. (Vanguard Vets as Catulan Reavers. J)

However I now rarely field any terminators at all, I don’t have room on my FOC, due to my current lean towards Dreadnoughts & Sternguard in Drops Pods, and my dislike of Terminators with Power Fists or only TH & SS or Pairs of Lighting Claws, it just doesn’t seem flexible enough to represent the more elite styling of Justaerin Terminator squads as one example.

I personally dislike taking the Marine Special Characters as “counts as”, it just seems a convenient way to make your army more “beardy/cheesy”, preferring to take standard commanders/Chapter Masters instead. Although some of them do fit certain armies, taking Lysander to represent Perturabo as one example.

I’m yet to read/purchase Codex: Space Wolves but some of the reports from the codex are interesting, e.g. standard equipment for Grey Hunters and “Counter Attack” seem to be fluffy for Luna Wolves, but I’m not sure about the rest of the Codex fitting my thoughts on how the Legion would fight. Until I get my hands on a copy I guess I’ll never know.

After discovering some of the other members of The Great Crusade website had blogs and looking over their work, I felt inspired to start up one of my own.

Hopefully over time I'll get the hang of having a blog and get in the habit of making regular posts/updates.

Well with that out of the way, I'll take a deep breath and hope you enjoy the journey I'm about to embark on.